Our work at Mawson Glacier was complete, but we still needed to be pulled out of the field.

The trip back to Scott Base was broken up with an overnight stay at Cape Roberts, which provided an enjoyable change of scene.

Cape Roberts is a tiny – less than 1 km long – ice-free peninsula, approximately 100 km south of Mawson Glacier and 125 km north of Scott Base and McMurdo Station. Discovered during a British Antarctic Expedition in 1907–1909, it is now occupied by a Skua colony, a small New Zealand managed hut and a range of scientific monitoring equipment. Cape Roberts was also the base for a large geological drilling project in the 1990’s that investigated the tectonic and climatic history of the region.

The hut, while very basic, was still very luxurious compared to our tent set-up. That evening we feasted on hut-made pizzas and apple crumble together with our helicopter pilot, Antarctic field trainer and two Scott Base staff who were temporarily staged at the hut.

But for us, the most exciting and novel aspect of Cape Roberts was its low-lying, coastal location.

Waves laden with fragments of recently broken up sea-ice lapped and crashed against the shore. In the direction of Ross Island, groups of penguins could be seen swimming in between icebergs.

A small group of Adélie penguins even hopped up onto the shore to say hello. So, after three visits to Antarctica, I can now satisfy many questions and say that I’ve seen a penguin!

The following day, we helped clean and shut up the hut for winter, and formed our camp gear and fuel into sling-loads – tightly packed bundles that are transported in a net that hangs below a helicopter. 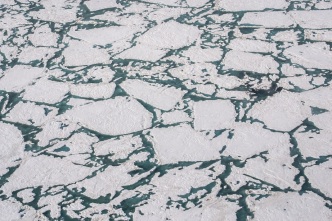 Sheets of broken up sea-ice.

A small iceberg in McMurdo Sound.

We then flew back to Scott Base, skirting the coast and retreating sea-ice margin.

Since flying out to Mawson Glacier, much of the McMurdo Sound – a small section of the Ross Sea between Ross Island and the Antarctic mainland – was now open water. Below us, we could now see icebergs, whales (minke and orca) and a U.S. icebreaker, which was forging a channel into McMurdo Station for the arrival of the end-of-season cargo ship.

A few days at Scott Base to ‘demobilise’ our gear and regain any lost weight, and then back to leafy New Zealand!

Here’s a video of our expedition highlights, produced by Shaun: